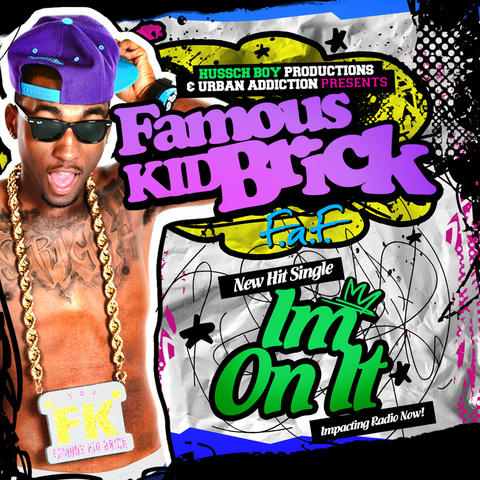 After two solid years of controlling dance floors with amped-up party rhymes and innovative style, St. Petersburg rapper Famous Kid Brick has continued to spread his infectious sound throughout the South like wildfire with a regional tour and runaway single “I’m On It.”

The single is currently #1 on Tampa’s WLLD 94.1 FM, which is based in Tampa Bay but covers the middle of Florida from Orlando down to Ft. Myers. And in addition, Brick is set to be featured in this month’s edition of Ozone and Coast2Coast magazines.


Now on the verge of releasing his second mixtape The YouTube Mixtape On CD on May 17, it’s just a matter of time before the rest of the world gets a dose of what the Sunshine State has been soaking up for months now. The mixtape is a collection of his YouTube videos that the rapper/ singer/ dancer/ model / actor posted over the years. The CD/ DVD features Famous Kid Brick rapping over industry beats and a few  tracks with Hussch Boys Records label mates Mike Gomes, Blackboi and Cristol.

“I’ve gotten so many positive comments about my music. I’ve done so much to just be getting a start,” he says. “But if you think this is something big, the best is yet to come.”

What is yet to come is his debut EP T.G.I.F. - Thank God I’m Famous shortly following the mixtape. And before long, Brick will soon have the world at his fingertips.

Born Dairian Brickhouse in Tampa and raised in Saint Petersburg, Brick dove headfirst into music in 2007 with the well-received debut single “I B Rollin’” featuring Slate. After dropping the single to a few cats around his hood, the song grew legs on its own. He had the opportunity to perform in front of over 1,000 kids at the University of South Florida. He got so much attention that he knew music had to be his calling.

Then when he thought that his rep couldn’t get any bigger, Brick hit them again with his angst-filled follow-up “The Anthem” featuring Smooth Hines. “Then, everybody started knowing my name,” he remembers. “People started getting familiar with my face. I started getting more respect in my area and outside my area as well.”

He had so much local fame that in his 2009 high school yearbook, he was voted most likely to become famous. Brick then created a group of fans, friends, and a few other artists called "The Famous Kidz," who all had the same desire in common, to become famous. And they would do whatever it would take for them to achieve that dream. It consisted of hot music, new fashion trends and an overwhelming abundance of support.

His career really began to take off after he released his third single "I’m On It." Since then, he has performed in more than 100 shows between the Tampa Bay area. As the single continues to catch on, he has enjoyed months of advanced booked shows. Promoters and fans across the country are saying that Brick rocking stages like they've never seen before.

“I put my all into everything I do,” Brick admits. “I put in 100 percent and the fans can tell that. They expect nothing less than me giving my all. And I will never let them down because they have always been there for me and showed me love.”