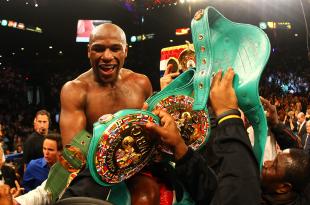 "Things happen. You live and you learn. The only thing he can do is rejuvenate himself and bounce back like a true champion," stated undefeated pound-for-pound champion Floyd Mayweather, who shared his thoughts on Manny Pacquiao's shocking 6th round knockout loss at the hands of Juan Manuel Marquez. Although he has yet to actually see the fight, Mayweather praised the performances of both fighters and offered some words of advice for the 8-division world champion.

"Marquez is a true champion, Manny Pacquiao is a true champion, both of them went out there and put on a good performance, and that's a good thing for the sport of boxing," Mayweather commented. "I wish Pacquiao nothing but the best. I wish that he can bounce back and he can recoup from this. In the sport of boxing, you have to really dedicate yourself to your craft. You have to really, really dedicate yourself to your craft. I think he's got so many different things on the outside that he worries about, you know. But it was a good thing that he was able to come into the sport, you know, piggyback off my name, and get a bunch of endorsement deals and make a good living. That's a great thing."

As far as the mega-fight with the Filipino icon is concerned, Mayweather suggests the manner in which Pacquiao was knocked out probably means he has a lot more to think about, and a long way to go, before that fight is ever a possibility again. "Pacquiao's focus should be trying to take a vacation, get his mind right, and get a few tune-up fights so he can bounce back," he explained. "I'm not here to talk bad about Pacquiao. I feel bad for him, honestly. I really feel bad for him. There's a difference in the ways you can get knocked out. See, when a guy gets knocked out and he can get up, they sit him on his stool, they rub his back, he go home and ice himself, you know, he go to the hospital and get checked out and he's okay, that's one thing. But when you gotta wake a guy up with smelling salt and he got a concussion and he gotta go to the hospital over night, that's crucial. I mean, that's close to the death."

Mayweather added, "Hopefully he's okay. My prayers go out to the Pacquiao family. I know he loves the sport of boxing, so hopefully he can bounce back."