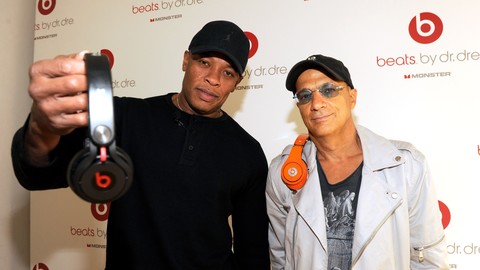 Could “Beats By Dre” soon be “Beats By Apple”? That’s what Matthew Garrahan and Tim Bradshaw of the Financial Times are reporting: Apple is “closing in” on what would be its largest ever acquisition, a potential $3.2 billion purchase of Beats Electronics.

Beats is primarily known as the popular high-end headphone maker founded in 2008 by rapper-turned-businessman Dr. Dre (perennial member of Forbes’ Cash Kings list) and music producer Jimmy Iovine. The company also operates a new streaming music service. Forbes had previously estimated that the founders each owned approximately 25% of the company, but there have been a number of transactions in the last year, with former majority owner HTC backing out and private equity firm Carlyle Group investing as a minority partner.

Beats also reportedly raised $60 million in funding from, among others, billionaires Len Blavatnik, Marc Rowan, James Packer, and Lee Bass. Most recently, Forbes estimated the value of Beats at about $2 billion, but Apple would appear to be paying well above that if the acquisition goes through. Unlike some of its Silicon Valley peers,

Apple is not known for making big acquisitions, so such a deal would be a marked departure in style for CEO Tim Cook. But it could be a way to start using Apple’s massive hoard of cash or attempt to shore up the company’s large but slowing iTunes music sales business. $3.2 billion would be the same price Google GOOGL +0.35% paid for high-end thermostat maker Nest Labs in January.

The Financial Times reports that a deal could be announced as early as next week, although terms are not final. Apple AAPL -0.73% shares are down slightly in after hours trading. Recently, the stock has been trading at its highest price since October 2012.