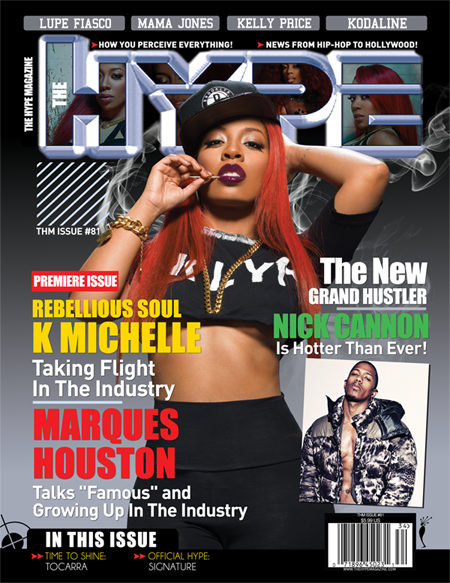 The Hype Magazine, the world's #1 digital magazine and online entertainment portal, announces its national newsstand debut Nov. 2013. The Magazine's debut cover will boast Atlantic Records' recording artist, R&B sensation and television star, K. Michelle as the cover story for the Winter Issue; joining her is, multifaceted entertainer, and philanthropist, Nick Cannon as the main features, for this historic issue. The Hype Magazine recently signed a multi-year national distribution deal placing them on newsstands and in retail outlets throughout the United States and abroad.

K. Michelle's meteoric rise, couldn't have played out more perfectly, had it been scripted for television. After having defied the odds in both music and in life, this classically trained pianist/song writer turned reality star, can now add #1 charting Billboard artist on the Urban Charts and #2 on the Billboard 200, selling 71,853 copies its first week. The album's hit single, V.S.O.P. http://ow.ly/q2yfT continues to rock the airwaves all over the country, while K. Michelle continues to sell out venues in every city she visits. The album, currently available on iTunes: http://ow.ly/q2yf1 has garnered some of the highest compliments music’s critics have to offer. Vibe Magazine generously calls it “The modern woman’s manifesto” and fans have canonized K. Michelle as their patron saint of unabashed honesty and raw truth. Of his artist, famed music manager Jeff Robinson has this to say: “Counted out, written off and dismissed! Yet, our focus never wavered. We put our hands to the plow and never looked back. I’m very proud of K. Michelle! Welcome to the NEW reality!” (Atlantic Records)

Nick Cannon is a burgeoning entertainment industry mogul, who began as a standup comedian to go on and claim the crown as youngest staff writer in television history on Nickelodeon's "All That" at age 17, to becoming the host of America's Got Talent and a plethora of other successful enterprises via his Ncredible Entertainment imprint. His MTV improv comedy series "WildNOut," quickly became one of the most successful shows in the network's history.

People Magazine named Cannon as one of the 'Top Ten most successful young people in Hollywood' and he has been featured on the covers of magazines like Complex and Black Enterprises' 40 Under 40. He recently signed a multimillion dollar, multi-year first-look deal with the NBC network to provide scripted and unscripted productions. (NBC.com)

The Hype Magazine was founded in 2002 by Jameelah "Just Jay" Wilkerson, steadily growing as a brand and respected entertainment media outlet, covering news from Hip Hop to Hollywood. Boasting nearly 200,000 digital subscribers and 2 million unique visitors per month to its online properties, print distribution has become one of the demands of The Hype Magazine readers and fans.

The Hype Magazine, is celebrating their 11th year with the announcement that the outlet is heading to newsstands in November 2013.

“The 11-year anniversary is significant because we have history. The magazine has gone through changes and we have made it through the first 10 years. This is the time where you start to build respect amongst your peers and doors start to open, which they have,” says The Hype Magazine CEO and Publisher, Jameelah "Just Jay" Wilkerson. She continues, “We at The Hype Magazine are eternally grateful to our readers, fans and the artists who have made our magazine the #1 digital magazine in the world.”

Special guest appearances will include, Universal Recording Artists, Tocarra Hamilton and Cordula, performing their new singles. Tocarra's beautiful voice is known for her major music collaborations with Usher on his hit single, "Daddy's Home," Pitbull's "Dance With Me" and her single with Lil Scrappy, "No Love". Singer, Songwriter, Pop/R&B sensation Cordula, released her new single “My Ride” to much fanfare within the urban music industry. “My Ride” represents the debut single for Cordula’s 'Music’z Therapy' imprint, following the label’s deal signing with Universal Music Group Distribution and Fontana Distribution. Both artists are managed by Robert Terell, CEO of Wealth Nation Entertainment.

The Hype Magazine is also the parent company for THM Media Group, the Marketing and PR arm of the company. Leveraging the magazine and its network on behalf of its clients, THM handles the reins for managing the reputations and social branding on behalf of projects that include Hip Hop legend CL Smooth, West Coast funkster Kokane and Miltickit of the multi-Grammy Award winning producers, Track Kingz.

About The H.Y.P.E. Magazine

Established in 2002, The Hype Magazine is headquartered in Indianapolis, Indiana. HYPE stands for "How You Perceive Everything." It is designed to provide its patrons with relevant entertainment, eye-catching consumer ads, fashion and music news of their favorite established entertainers, while spotlighting independent artists and fashion designers seeking to gain greater exposure. This magazine reaches a unique group of consumers who view The Hype Magazine as their source for music, fashion, new trends, new products, services, entertainment, events and topics relevant to their daily lives; both personal and professional.

In 2013, The Hype Magazine won the S.T.R.O.B.E. Award for "Best Online Magazine” (Music) and is nominated for the S.E.A. (Southern Entertainment Awards) 2013 Magazine of the Year.

The Hype Magazine’s mission is to tap into new technologies and media innovations to support the continued growth of the brand and champion journalistic integrity.