Two police officers sitting in their patrol car in Brooklyn were shot at point-blank range and killed on Saturday afternoon by a man who, officials said, had traveled to the city from Baltimore vowing to kill officers. The suspect then committed suicide with the same gun, the authorities said.

The officers, Wenjian Liu and Rafael Ramos, were in the car near Myrtle and Tompkins Avenues in Bedford-Stuyvesant in the shadow of a tall housing project when the gunman, Ismaaiyl Brinsley, walked up to the passenger-side window and assumed a firing stance, Police Commissioner William J. Bratton said. Mr. Brinsley shot several rounds into the heads and upper bodies of the officers, who never drew their weapons, the authorities said.

Mr. Brinsley, 28, then fled down the street and onto the platform of a nearby subway station, where he killed himself as officers closed in. The police recovered a silver semiautomatic handgun, Mr. Bratton said.

Mr. Brinsley, who had a long rap sheet of crimes that included robbery and carrying a concealed gun, is believed to have shot his former girlfriend near Baltimore before traveling to Brooklyn, the authorities said. He made statements on social media suggesting that he planned to kill police officers and was angered about the Eric Garner and Michael Brown cases\

Investigators at the scene where Officers Wenjian Liu and Rafael Ramos were shot and killed on Saturday. Credit John Minchillo/Associated Press
Authorities in Baltimore sent a warning that Mr. Brinsley had made these threats, but it was received in New York at essentially the same time as the killings, officials said.

The shootings, the chase, the suicide of Mr. Brinsley and the desperate but failed bid to save the lives of the officers — their uniforms soaked in blood — turned a busy commercial intersection on the Saturday before Christmas into a scene of pandemonium. 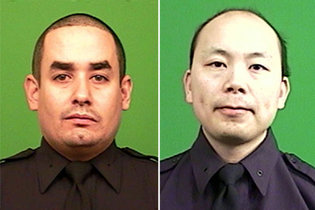 The manager of a liquor store at the corner, Charlie Hu, said the two police officers were slouched over in the front seat of their patrol car. Both of them appeared to have been shot in the head, Mr. Hu said, and one of the officers had blood spilling out of his face.

“Today two of New York’s finest were shot and killed with no warning, no provocation,” Mr. Bratton said at Woodhull Hospital in Williamsburg, where the officers were declared dead. “They were, quite simply, assassinated — targeted for their uniform and for the responsibility they embraced to keep the people of this city safe.” 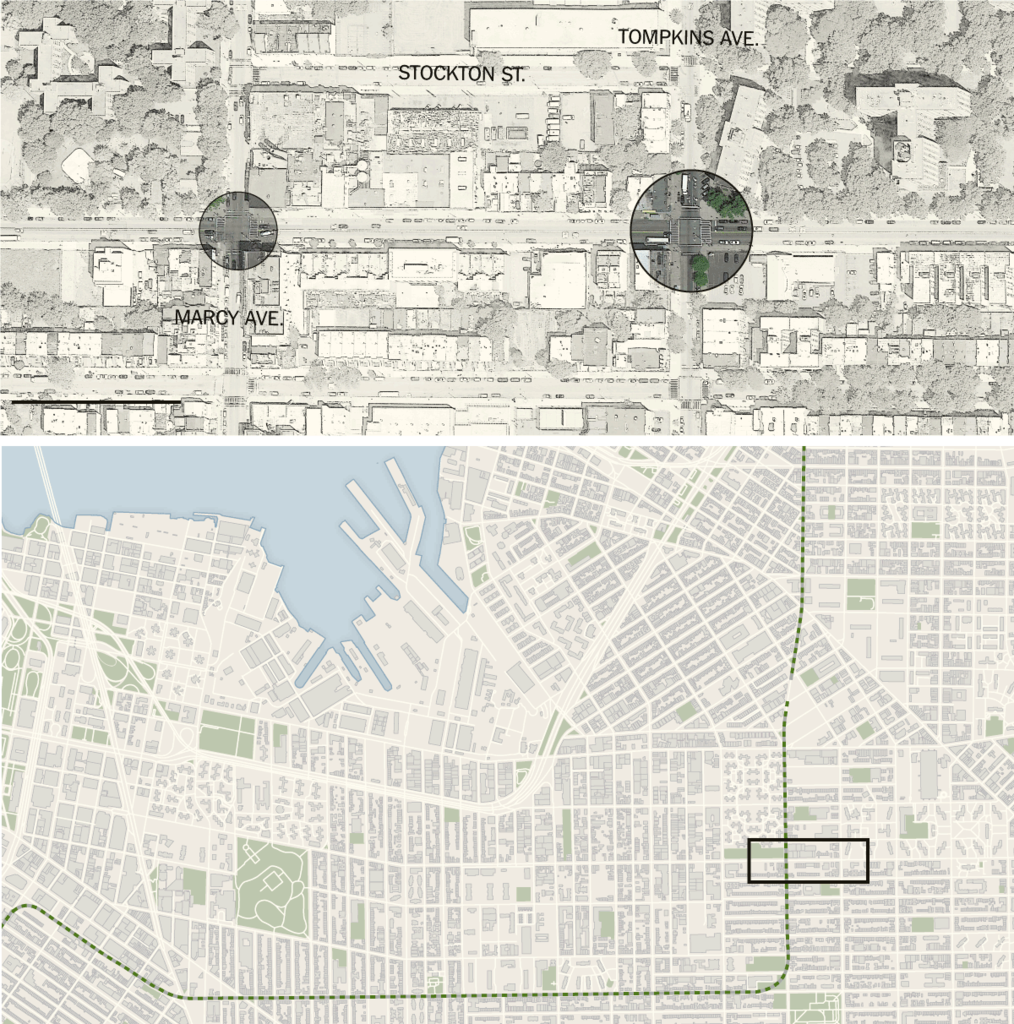 “Officer Ramos and Officer Liu never had the opportunity to draw their weapons,” he continued. “They may have never even seen the assailant, their murderer.”

Mayor Bill de Blasio, standing beside the police commissioner, said, “It is an attack on all of us; it’s an attack on everything we hold dear.”

Mr. de Blasio said he had met with the officers’ families, including Officer Ramos’s 13-year-old son, who “couldn’t comprehend what had happened to his father.”

Late Saturday night, President Obama condemned the “murder of two police officers in New York City,” noting that officers who serve their communities “deserve our respect and gratitude every single day. Tonight, I ask people to reject violence and words that harm, and turn to words that heal — prayer, patient dialogue, and sympathy for the friends and family of the fallen.”

Continue reading the main story
The double killing comes at a moment when protests over police tactics have roiled the city and other parts of the nation. Since a grand jury declined to bring criminal charges in the case of Mr. Garner, a black Staten Island man who died after a police chokehold in July, protesters have filled the streets on numerous occasions. Those protests followed more violent ones in Ferguson, Mo., after there were no charges in the police shooting of Mr. Brown, an unarmed black teenager.

The mayor has taken care to praise officers’ work repeatedly since the grand jury decision, but he has stressed the rights of protesters to express themselves and spoken of his personal experience instructing his biracial son, Dante, to “take special care” during any police encounters.

Some union leaders suggested the mayor had sent a message that police officers were to be feared. Cries for the police to use more restraint have been buttressed by historic drops in violent crime. The city has seen roughly 300 killings so far this year, a number so low as to be unheard-of two decades ago. 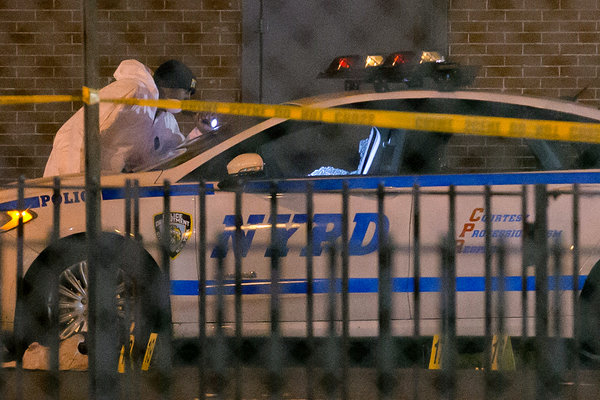 But the shooting on Saturday seemed reminiscent of decades past, when the city was mired in an epidemic of drugs and violence and, in 1988, a police officer was shot while he sat alone in his patrol car guarding the home of a man who had testified in a drug case. That killing shook the city, sparking an escalation in the war on drugs and an aggressive crackdown on violent crime. Mr. Bratton said that the attack on Saturday was the seventh time since 1972 that partners in the Police Department had been killed at the same time.

The killing seemed to drive the wedge between Mr. de Blasio and rank-and-file officers even deeper. Video posted online showed dozens of officers turning their backs to the mayor as he walked into anews conference on Saturday night.

“There’s blood on many hands tonight — those that incited violence on the street under the guise of protests, that tried to tear down what New York City police officers did every day," the head of the Patrolmen’s Benevolent Association, Patrick Lynch, said outside Woodhull Hospital. He added, “That blood on the hands starts on the steps of City Hall, in the office of the mayor.”

Mr. Brinsley, whose records indicate that he was born in New York, had been arrested several times in Georgia and Ohio. He was arrested on accusations of carrying a concealed weapon and stealing in Georgia, and in Ohio in connection with theft and robbery, among other run-ins with the police. His last known residence was in Georgia. Mr. Bratton said the suspect also had ties to East Flatbush, Brooklyn, but would not be more specific.

Earlier on Saturday, law enforcement officials said, Mr. Brinsley shot his former girlfriend in the stomach near Baltimore. She survived.

Mr. Bratton said investigators believed that after the Maryland shooting, Mr. Brinsley posted to an Instagram account that he was headed to New York to attack police officers and that the posting might be his last. Mr. Bratton lamented the timing of the warning from authorities. “The tragedy here is that just as the warning was coming in, the murder was occurring,” he said.

In the Instagram posting that was apparently written by Mr. Brinsley, he called the attack retribution for the deaths of Mr. Garner and Mr. Brown.

Below a photo of a firearm, the Instagram posting, which misspells Mr. Garner’s name, reads: “I’m Putting Wings On Pigs Today. They Take 1 Of Ours......Let’s Take 2 of Theirs #ShootThePolice #RIPErivGardner #RIPMikeBrown.”

Mr. Brinsley’s sister, Nawaal Brinsley, said on Saturday that she had not seen her brother in two years. “Oh my goodness, oh my goodness,” she said when told of the attack. She said she did not remember hearing her brother express anger at the police.

The double killing came at a moment when protests over police tactics have roiled the city. Credit Kevin Hagen for The New York Times
Mr. Bratton said that Officer Liu had been a seven-year veteran of the force and that Officer Ramos had been an officer since 2012. Officer Liu, he added, had been married two months.

The shootings seemed poised to cool the protests of recent months. The Rev. Al Sharpton, who has been an outspoken backer of the protests in recent weeks, condemned the attack.

“Any use of the names of Eric Garner and Michael Brown in connection with any violence or killing of police is reprehensible and against the pursuit of justice in both cases,” he said.

The Brooklyn borough president, Eric Adams, worried that the attack would “tarnish” the campaign against police brutality that has swept the city.

“It’s horrific to have someone intentionally shoot a police officer; it’s the wrong message,” he said. “And that is not the message that many have been calling on when they talk about reform.”

The intersection where the shooting occurred, which is dominated by the Tompkins housing project across the street, is a spot where residents often see police keeping watch. The officers had been assigned to patrol the Tompkins Houses in response to an uptick in violence there this year, Mr. Bratton said.

The increased police presence had improved the neighborhood, some said. “It’s changed and gotten better through the years,” said Felix Camacho, 40, an airport ramp agent who has lived for eight years on the block where the shooting happened. But other residents worried that the episode on Saturday would inflame relations.

More than 100 officers lined the hospital’s exit ramp as the bodies of Officers Liu and Ramos were driven out in ambulances.