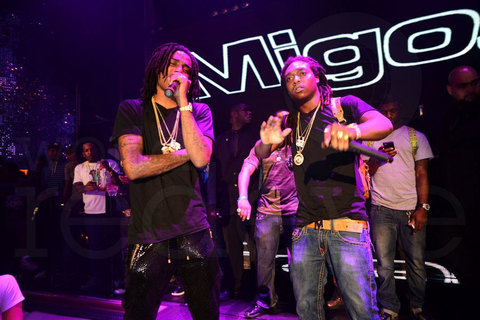 A member of the hip hop trio Migos was shot in the leg early Friday morning during a shootout on I-95, while members of the van were heading back to its South Beach hotel.

The band was scheduled to play at the nightclub Cafe Iguana in Pembroke Pines, but the show was cancelled after some type of tif with management, and the group instead headed south in its Merceds van before the altercation.

Florida Highway Patrol trooper Joe Sanchez said the van was heading south on I-95 some time after 3:30 a.m. with eight people in it when a black vehicle pulled alongside near the Northwest 62nd Street exit, and someone fired a weapon toward it.

Sanchez said someone in the van who was carrying a weapon returned fire. The only person hit was the band member, and the Mercedes traveled on to Jackson Memorial Hospital, where the shooting victim is recovering with non-life threatening injuries, Sanchez said.

He was not named.

“A guy in the van had a gun, he shoots back at them,” said Sanchez. “There was an exchange of gunfire.”

Police are still looking for whoever fired the weapon in the black vehicle. No one else was injured, said Sanchez.