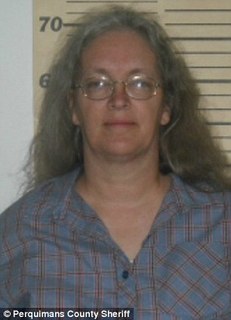 A North Carolina family have been charged over claims that six brothers sexually abused a girl for nearly a decade, while their parents failed to intervene.

The Jackson brothers and their parents, John and Nita, were arrested last Tuesday, after a year-long investigation into the home-schooled family.

The abuse, which allegedly started when the girl was four years old, came to light after one of the brothers confessed to a pastor in 2012 that he had sinned.

Investigated: Parents John and Nita Jackson have been charged with child neglect for allegedly failing to stop their sons abusing a girl for nearly 10 years

During the years of the alleged abuse, which continued until the victim was 14, the family lived in a dilapidated house in Perquimans County, where neighbors say they kept to themselves.

One of the brothers allegedly told police that his mother had witnessed the abuse on at least one occasion but just walked away.

Nita Jackson, 54, and her husband John, 65, are facing charges of felony child neglect and have been released on a $15,000 bond each.

Their six sons are facing a range of charges connected to the alleged rape and abuse of the girl. Charged: Benjamin Jackson, left, and his brother Aaron, right, who are both 19, have been charged with three counts of rape each. All of the brothers are being held on bond

The younger brothers, Benjamin and Aaron Jackson, both 19, have each been charged with three counts statutory rape.

'Personally, I lay the blame on the parents, and their charges are less than what the boys are going to get,' Sheriff Eric Tilley told WKTR.

'It’s their responsibilities to raise those kids and somewhere along the line, they failed.'

He added that one of the brothers had confessed to a pastor in 2012, who advised him to contact police. When police first tried to interview the victim, the couple allegedly prevented her from talking.

'How many people are going to walk into a law enforcement office and say "I had sex with [a child]?" It just doesn’t happen.

'These kids, they do have a belief in the Bible. They knew it was wrong and they had to get it out.' Sheriff Tilley said. Abuse: A girl was allegedly abused for more than 10 years when she lived at this North Carolina home. When an investigation began, the family moved to a different state

After police began the investigation the family moved to Colorado with the girl. Once there the victim reached out to Child Protective Services.

North Carolina police then traveled to Colorado, where they were able to interview the girl, who is now 16.

The brothers are being held on $150,000 bond while they wait for their arraignment.