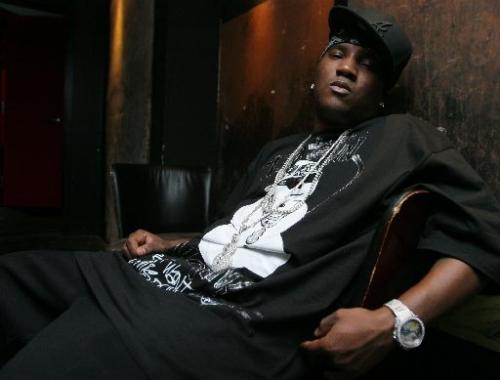 MOUNTAIN VIEW -- Grammy-nominated and top-selling rapper Young Jeezy was one of six people arrested Sunday in Irvine on suspicion of possessing an assault rifle during the investigation into a deadly shooting backstage at a concert at Shoreline Amphitheatre over the weekend, authorities said.

The 36-year-old Jeezy, whose real name is Jay Wayne Jenkins, was arrested by Mountain View police detectives at the Verizon Amphitheatre in Irvine, which was the next stop for the "Under the Influence of Music" national concert tour, of which he was part of a bill headlined by Wiz Khalifa, according to the Mountain View Police Department.

Jenkins is being held at Orange County Central Jail on $1 million bail.

None of the arrested have been identified as suspects in shooting, which was reported just after 11 p.m. -- as the concert was letting out -- and claimed the life of 38-year-old Orinda resident Eric Johnson, who police said was an entertainment promoter but not connected to Jenkins' tour. It was not clear if Johnson was with anyone when he was shot.

Mountain View police Sgt. Saul Jaeger, a department spokesman, said detectives traveled to Irvine as part of the homicide investigation and, with the help of local police, served search warrants that turned up illegal firearms linked to the six people arrested.

"We haven't made any arrests for the homicide. These arrests were made during the execution of the warrant," Jaeger said.

As of Monday afternoon, Jenkins, Gilmore, Marshall, and Maynard were still in jail; custody information for Beason and Kuniansky-Altman was not available.

After the shooting, headliner Wiz Khalifa tweeted condolences to Johnson's family and wrote "violence is never the answer," and concert promoter Live Nation cancelled the tour's Saturday stop in Chula Vista, near San Diego, with no plans to reschedule, citing the homicide investigation.

The tour continued in Irvine, though Jenkins was noticeably absent from the lineup, according to concert-goers' accounts on social media.

Investigators are still seeking a suspect they generally described as a black man in his 20s with short hair who was between 5-foot-6 and 5-foot-8, wearing a black shirt, a red baseball cap and possibly white pants. The suspected weapon in the shooting was a black pistol with a large magazine.

Police ask that witnesses or anyone with information about the case, including videos or photos of the backstage area around the time of the shooting, contact detectives by calling 650-903-6395, emailing police@mountainview.gov, send an anonymous text message with the keyword "MVTips" to 274637, or submit Twitter posts or images with #MVPDInfo. Tipsters should reference case number 14-4346.

Check back later for updates to this story.

Seems like they were the only ones with an identified weapon. definitely not in their 20s. I can't see Jeezy wearing a red baseball… He will get out soon.