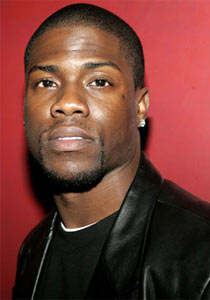 LOS ANGELES (AP) — Authorities say comedian Kevin Hart has been arrested on suspicion of drunken driving after his black Mercedes nearly collided with a tanker truck on a Southern California freeway.

California Highway Patrol Officer Ed Jacobs says Hart appeared intoxicated when he was pulled over before dawn Sunday on Highway 101 in Los Angeles.

Hart failed a field sobriety test and was booked for misdemeanor DUI. He was held on a $5,000 bond.

Jacobs says the Mercedes was being driven erratically at over 90 mph and nearly slammed into a gas tanker.

A female passenger in Hart's car was sent home in a taxi.

Hart starred in the 2011 stand-up special Laugh At My Pain and has appeared in TV's Undeclared and in several movies.

A call to a spokesperson for Hart was not immediately returned.