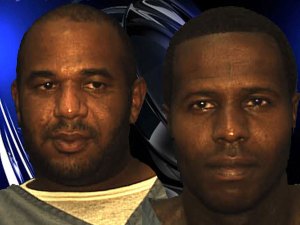 Florida authorities are searching for two convicted killers who left a prison in the Florida panhandle with forged documents.

Convicted murderers Joseph Jenkins and Charles Walker recently walked out of Florida’s Franklin Correctional Institution after the prison received forged court documents, authorities say. Now police are searching for the two men as prison and court officials work to make sure no other inmates were mistakenly released.

Shortly after their release, both men registered at the Orange County jail, according to the Orlando Sentinel. They completed paperwork and submitted fingerprints in compliance with the state’s requirements for released convicts.

It isn’t clear who forged the documents or whether the two cases are even connected. The Associated Press reports that a similar scheme involving a third prisoner was foiled in the spring. Elsewhere, prisoners have used forged documents to escape successfully, including one case in Pennsylvania last year.