If you’re in Chicago, near the Richard J. Daley Center at 50 W Washington, you could stop by and see Siohvaughn Funches — Dwyane Wade’s ex-wife — on the street with a sign berating her ex. Or as Black Sports Online calls it, “Having a nervous breakdown.”

Obviously she feels under appreciated, even though a court awarded her a $1 million settlement to close out their divorce, which has been bouncing around the courts for the past three years. Wade got custody of the couple’s two children (I can’t imagine why, after seeing this), and also has been paying $25,000 per month alimony.

The ex-Mrs. Wade had sued Dwyane Wade for $1 million, but later dropped the suit, according to the Chicago Tribune. That seems to be at the crux of this latest protest. Occupy The Daley Center? That seems to be the way to protest these days. 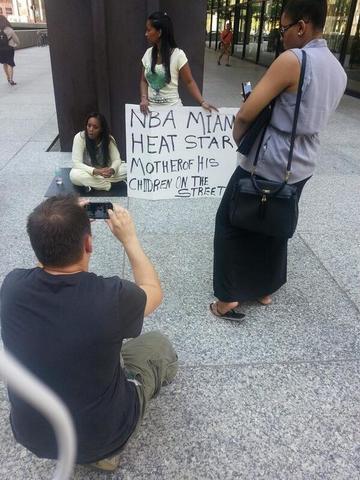 Siohvaughn Wade said she would “live on the streets” as she protested what she called the “injustice” of a failed lawsuit she filed in an effort to get money from her ex-husband’s endorsement deals.

“I don’t want anything, no money, all I want is my freedom and my voice,” she said.

Sadly, having just been awarded $1 million in a divorce, along with $25,000 a month for living expenses, does not equal “living on the streets.” It’s actually kind of insulting, I would imagine, to those who actually do.

Awarded $1 million and still get $25,000 a month with No custody of their kids!!! She one of them crazy bitches that whats more money and we ALL know a crazy bitch like that!!