[WOW] Man Killed By Girlfriend After Tweeting His #WomanCrushWednesday #WCW

Rachael Edwardson, age 24, while he was sleep in their apartment they both shared. Friends of the two say that they never showed any external relationship problems and seemed to be very happy with each other. According to a close friend of the couple,

there was no violence between the two but just regular arguments that most couples go through. When the police arrived at the crime scene, Jacobs was already dead in their bed and laying in a “pool of blood” with his iPhone still in his hand. Edwardson was found by the police in the bathtub face down with her hands behind her back waiting for the police to arrest her. 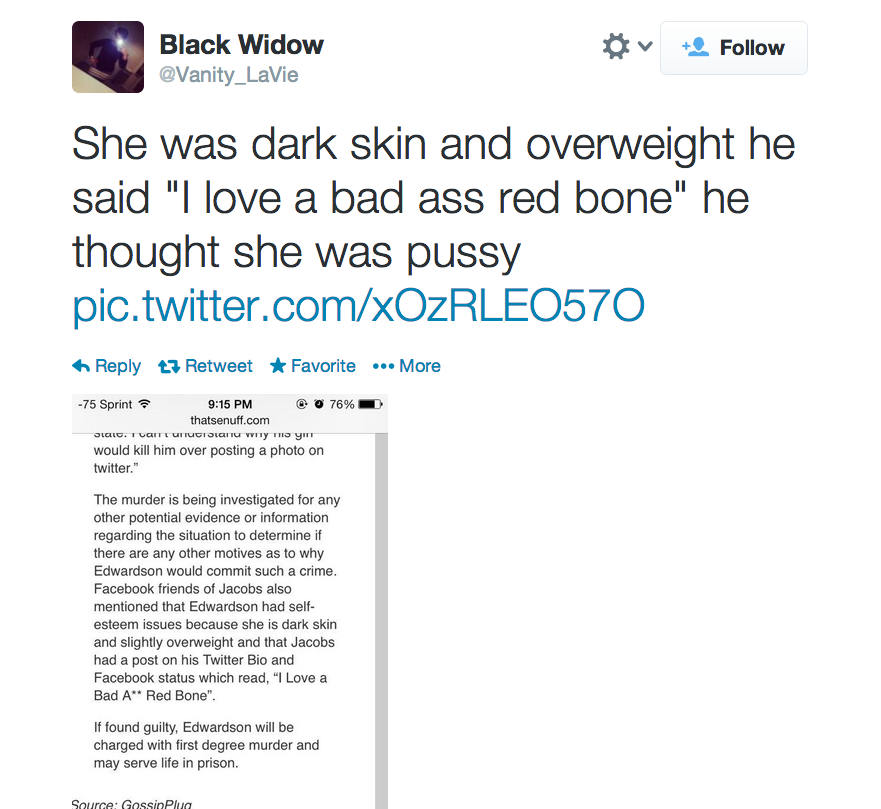 Deron’s best friend since middle school made a public statement saying “I was texting my boy Deron when he sent me the iMessage of the girl he was going to tweet out as his Woman Crush. It was a chick he DM’d frequently and got nudes from but she didn’t even live in our state. I can’t understand why his girl would kill him over posting a photo on twitter.”

The murder is being investigated for any other potential evidence or information regarding the situation to determine if there are any other motives as to why Edwardson would commit such a crime. Facebook friends of Jacobs also mentioned that Edwardson had self-esteem issues because she is dark skin and slightly overweight and that Jacobs had a post on his Twitter Bio and Facebook status which read, “I Love a Bad A** Red Bone”.

If found guilty, Edwardson will be charged with first degree murder and may serve life in prison.