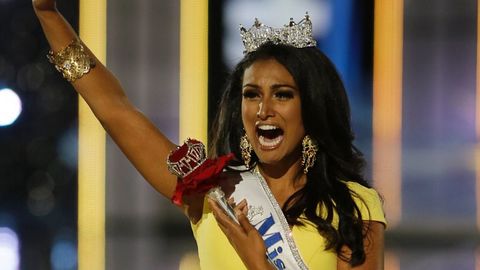 If you thought those tweets calling the first ever Indian American Miss America Nina Dav..., wait until you see these!

Apparently, to these shmucks, looking like a Muslim and/or Arab is just as bad (or, for most if not all of them, synonymous with the word terrorist.) And now the brilliant Muslim tweets. P.S. Islam is a religion, how the fuck does someone LOOK Muslim? (Their answer: NON-WHITE SKIN!) No, it is not ironic Kara and Aaron because Muslims can be New Yorkers too and not every Muslim is defined by a few people just like not ever white person is defined by your stupid, ignorant asses.

Yes, Bradley. This is exactly how the Muslim Brotherhood planned it all out. Rise to power in Egypt, only to be overthrown and viciously slaughtered in a coup, followed by winning Miss America. SUCCESS!

She was clearly the Best looking woman on stage period by far , can not take that away from her ........