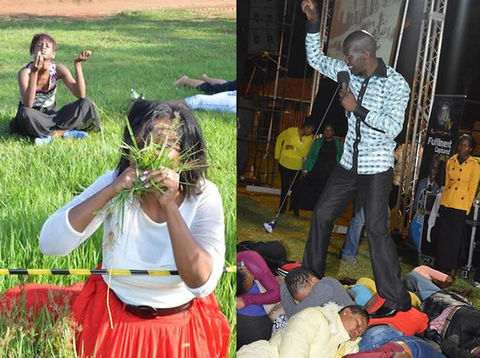 According to All Christian News on Jan. 11, a pastor convinces his congregation that he has come up with a novel way to get closer to God.

Criticism of the bizarre behavior has been posted on the church's Facebook page. Godfrey Albertyn wrote that he thought the pastor was making the Christians look like fools and he was seriously abusing his power over them. He said Lesego should be ashamed of himself and his behavior was disgraceful.

Naome Ouma Dlamini wrote that what the congregation was doing was just pathetic and you didn’t need to search the Bible to see what they were doing was wrong. You only needed a little common sense.

One person made a very good point when he said, "Is this a scene in a movie...this can't be real. God created animals to chew grass and made human beings to dominate over animals. Any person who reduces human beings to animals is definitely not of God."

Members of the pastor's congregation had plenty to say about the pastor's mandate. One woman claimed eating the grass stopped her from having a sore throat, while another said it healed her after a stroke.

Doreen Kgatle, 27, who suffered a stroke two years ago said, "I could not walk but soon after eating the grass, as the pastor had ordered, I started gaining strength and an hour later I could walk again."

The Daily Mail reports that the pastor steps on people as they are eating, and he orders other congregants to slap and trample on them.

The pastor has not responded to all the outrage, but he did post on the church's Facebook page "God is at work and His people are testifying right now."