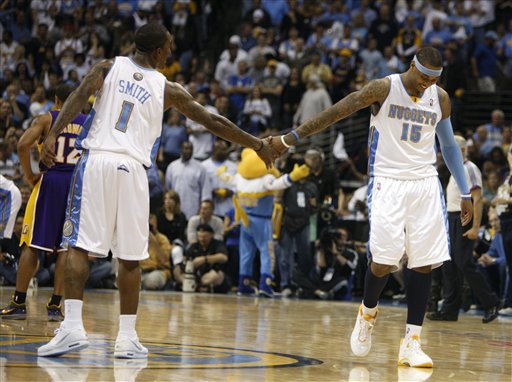 AP Photo/Jack Dempsey
A stomach virus and a poor shooting performance from Carmelo Anthony should have been enough to give the Lakers a winning advantage. Add in a bad ankle on Melo and that should equal a Lakers win. Wrong.

Denver did what it’s done all playoffs, and that’s find another player to step up. Every game in this series the Nuggets have had a different player step up, and the Lakers haven’t.

In game 1 Carmelo established himself as the scorer of the team, while Chauncey Billups continued to be Chauncey Billups. In game 2 Linas Kleiza and Kenyon Martin put the Lakers on notice that they too came to play. In game 3 Chris Anderson and Nene reminded the Lakers of why they’re getting minutes despite the loss. And last night JR Smith put his pain aside and let the Lakers know he was there too.

Smith had 24 points, 4 assist, 2 rebounds, 2 steals and went 4-9 from the three-point line. The stat that made Smith so dangerous last night was his assists, because normally when Smith has the ball he shoots which the Lakers had to know because the whole world knows that. The whole world was wrong.

Smith drove to the basket and dished the ball off, catching Laker defenders and fans across the world off guard providing a spark off the bench for the Nuggets during the absence of Anthony who was fighting his illness and hurt ankle.

Noticing Melo wasn’t 100 percent; Billups put the team on his back and added 24 points to the Nuggets cause. Once again the frontcourt dominated Nene had himself a double double to the tune of 14 points and 13 rebounds, and he added 6 assists to his stats including a sweet hand off to a slashing JR Smith for a thunderous dunk.

Kenyon Martin had 13 points, 15 boards, and 2 blocks. The Birdman had 14 rebounds and 2 blocks, but the thing that doesn’t show up in the box scores is the defensive effort he Martin and Nene put on display in helping the nuggets win game 4, 120-101.

The Nuggets as a whole out rebounded the Lakers 58-40 with 20 of those rebounds being offensive, and that equals 20-second chance shots for the Nuggets.

As usual Kobe Bryant and Pau Gasol showed up to play. Kobe had 34 points, 7 assist, and 5 rebounds. Gasol 21 points and 10 boards, but nobody else really did anything. If it hadn’t been for free throws some Lakers players wouldn’t have hit double digits because the supporting cast shot very poorly from the field.

Los Angeles showed a lack of toughness last night, and didn’t play like they were trying to win a championship. With Anthony less than 100 percent L.A. should have attacked relentlessly with out letting up.

People say animals are more dangerous when they are wounded, and that’s exactly how the Nuggets responded, like a wounded animal. While the Lakers focused on the poor performance from Melo, the rest of the Nuggets proved to be deadly, and by the time they were able to focus on the other Nuggets Melo found his game.

He started off 0-10 from the field, but finished with 15 points thanks to a few big rebounds and some free throws down the stretch. Game 5 goes back to Los Angeles on Wednesday night with the series tied at 2 a piece.