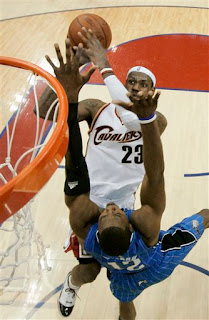 Williams wasn’t the only supporting cast member to step up last night as Zydrunas Ilgauskas scored 16 points and Delonte West put up 13 points of his own.

Despite the early lead the fans at Quicken Loans arena held their breath knowing how easily Orlando has climbed back into games during this series, and last night was no exception as the Magic went on a 45-24 run to end the first half.

From there it was a dogfight till the end. Then in the 4th quarter we witnessed the same Lebron James that took Detroit down in game 5 a couple of years ago. King James took over scoring 24 points in the second half and 17 in the fourth quarter.

When he wasn’t scoring he was facilitating; dishing passes to wide open teammates Williams and Gibson who each knocked down 3’s, and then he pretended to drive to the basket just to stop and dish the ball off to a cutting Anderson Varejao who hit a reverse layup.

By night’s end King James messed around and got a triple double to the tune of 37 points 14 boards and 12 assist. It was a masterful performance as Lebron took the ball at the top of the key on every possession and forced Orlando to focus on him defensively.

He first backed Rafer Alston down just to hit a turn around jumper on him. Then he backed Mikael Pietrus down just in time to spin off him and go right at Dwight Howard for a hard layup, not shying away from the contact from the bigger Howard at all.

He later forced Pietrus to play off of him just enough for him to launch a deep 2 point jumper. By the time he showed Orlando all the different ways he could score the Magic decided to play him tighter. That’s when he was able to once again dish the ball off to his teammates, who were able to hit shots and help get the Cavaliers win a live to fight another day card.

Game 6 takes place Saturday night in Orlando, where Cleveland will try to push for a game 7 and then try to become only the 9th team to ever come back from a 3-1 deficit in a best of 7 series.