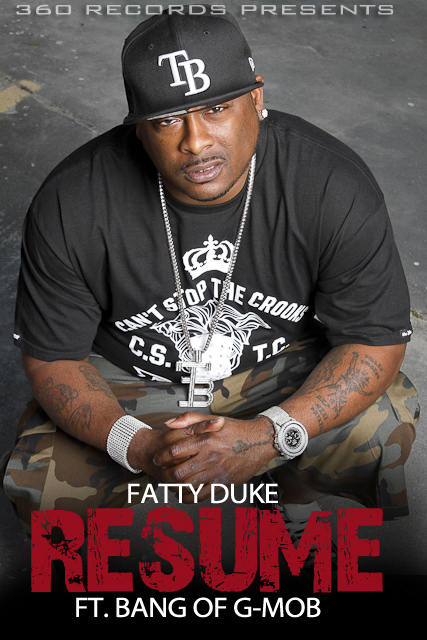 FATTY DUKE has not received any gifts yet

This isn’t your typical everyday rapper who talks about the street life…no Fatty Duke lives it and let his music speak for itself. He not only talks the talk but he walks the walk, a bona fide self-made hustler turned rapper/CEO. Hailing from Central Park projects in Hillsborough County, Tampa, Fatty Duke turned to music as a way to vent when he was facing tribulations such as death in the family and prison to name a few. With a long street resume and music influences like Trick Daddy, Bennie Siegel, and Scarface, Fatty Duke music tells it like it is straight from the heart of the street. ““I’m for the trappers...that’s what I do; I’m like a mediator for the people on what goes on in the streets. But fans will be able to relate to me universally because I been through a lot.”

Being the only child of early divorced parents, Fatty Duke was easily spoiled and grew to be rebellious. Though he was a star football player and made well grades, he still was attracted to the street life at an early age and had his first brush with the law at 15 for stealing a car. He continued to stay in and out of trouble causing him to steer away from college, and like any young teen he became easily fixated on money, clothes and women. However, what set Fatty Duke apart from other young hustlers was his sharp business sense. “I always had a knack for money and a business mindset that will definitely carry over into my new career.” Even with a minor record it was hard to get employment, so he did what few did with their illegitimate money…he opened several lucrative legal businesses such as a clothing store, fencing company and beauty supply store.

Though one minute Fatty Duke felt like he had the world in the palm of his hand, the next it was all easily snatched when he ‘best friend’ made allegations against him and he found himself facing 100 years for racketeering and trafficking. At the age of 27, next thing he knew he was on the run for his life for 15 months until he ran into Ed Shmull, an up-coming lawyer at the time that showed genuine concern and interest for Fatty Duke and the case. After months of trials and prayers, he beat the case and only received eight months in jail for probation violation. During this time Fatty Duke took yet another deadly blow when his father passed away in the hospital and he wasn’t allowed to see him. “I’m the type of person that I believe I can do anything I put my mind to so when I went to prison I started to write a book on my life story because I needed to pour my heart out. It was the only outlet I had and I held on to it and wrote non stop.” After that, Fatty Duke’s book slowly transitioned into lyrical verses.

Despite the outcome of things, Fatty Duke continued to stay positive and strong for his six kids, yet times were still hard and he only knew one way to provide for them…the streets. With family problems on top of everything else, music was the last thing on Fatty Duke’s mind until he ran into a local producer and he began to record his music again. “I was so ready to finally put my talents to the test and go hard with my music that I eventually went and brought my own studio. I have the swag and business sense already, I was just missing the music from the equation.”

Currently Fatty Duke is promoting his hot single called Resume debuting on Talkin’ Cash Shit, his first mixtape with collaborations such as G Mobb from Bang and producers like Matt from CTC Productions, Raw Tacks and DJ Young Cuba. “I’m setting up a mini city tour to promote my mixtape and build a brand for myself. I want Fatty Duke to be a household name. I would never put out garbage; my music from the heart so people can feel it.” And he’s definitely making a name for himself by opening for some of the hottest artist like Plies, Trina, OJ Juice Man, Black Dada, Yo Gotti, Waka Flaka, Gun Play, Ace Hood, Nicki Minaj and Gorilla Zoe to name a few. He is also involved in charity work volunteering with Children With A Vision and has plans to start his own foundation for young teens. But he’s not done there; fatty duke has always been known as the go-to-guy in the hood, yet now he’s the go-to-guy for the hits in the streets. “I think I will finish my book. It’s a good start for me. Now it just need a good movie-like ending and I’m working on that part now.”