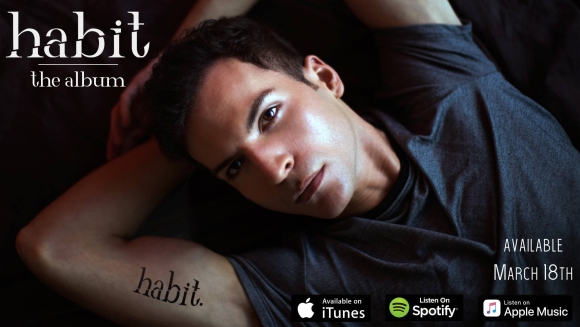 There’s a sweetening of hardships that runs through Brian Hutson’s debut album, Habit, named after the critical acclaim of his EP Midnight Sessions and Billboard Top 100 success of his single “Habit” released in the fall of 2018.

How can Brian Hutson’s depictions of lost love, lust and heartbreak—life’s troubles—be so pleasant? It’s because he relates not to present anguish, but to past strains that have already passed, were sweetened, and received their fulfillment and restrengthening in a renewed Brian Hutson. The reflections on the pains he had been through in the past couple of years become sugarcoated and part of a more grownup Brian Hutson as he summarizes his own unique story for the world in a search that every artist ultimately works toward: admiration, appreciation and love.

The 10 tracks of Habit have Brian Hutson doing what the world’s best singers do: treating the recording studio both as a confession box and as a self-affirmation podium, with the world listening on the other side of the soundproof wall. Just 30 seconds into the opening track, “Finding My Feet,” has Brian Hutson already riding a transition toward the first epic chorus with an expression of loneliness after a broken relationship: “Lying on an empty bed with words still left unsaid,” as he then heads solidly into a heartfelt chorus, sacrificing some verbal simplicity for an elaborate word painting communicating the essence of finding the strength to pick oneself up and move on with life after a breakup.

The recurring theme of Brian Hutson’s love life connections, detachments and resurgence as a stronger individual thanks to pushing out of the emotional struggles play out hand-in-hand with masterful pop-rock production inclusions of recurring pluck-picked clean electric guitars, melancholic piano, sweeping synths, touching leads and vocal adlibs and doubles that add that extra oomph and echo right where the songs require it.

The transformation Brian Hutson underwent in the past two years as a person, changed by his relationship experiences, becomes enveloped throughout the album in a reflective optimism and hope. “I Swear Someday” encapsulates the pursuit of intensifying a relationship through his skillful pop storytelling devices that reveal one portion of a circumstance, concealing two other portions, thus leaving his listeners to fill in the gaps with their own context.

Brian Hutson carefully caresses his voice through his beloved cardioid microphone receiver, the inanimate listener positioned willing and ready to absorb every nuance of his finessing and fully-controlled vocal delivery, and with total comfort and calm, pours out his insecurities in the repetitive-albeit-unanswered question—”Do you love me?”—in the album’s third track, “Love Me Anymore.”

Already three tracks in of rises, falls, optimism, hope, reflection upon the past, affirmation toward the future, love, lust, breakups, heartbreaks, connections and separations—the scene is set for Brian Hutson’s first lead single “Habit” on the fourth track to hit home. The decision to release this single, and the reason it rose up the Billboard Top 100 last year becomes as clear as day the moment the distorted-guitar-like synth triumphantly opens the curtain of an epic hook 33 seconds into the song: “You’re my habit…”

Together with the lyrical reveal-one-portion-conceal-two-portions aesthetic aligning Brian Hutson’s approach with that of many-a-great songwriter, it could just be me, but when you listen intently to the lyrics, you miss a whole bunch of words, raising more questions as to what he’s actually saying. Since today is 2019, then I have to say, this is great. In a world where everyone’s seen and done everything, and less and less is impressing us from one day to the next, then such subtle change-ups as hiding some words under a question mark as to what was verbalized are exactly what can convert just-listening fans to fans who clack away at their keyboards on sites like Genius.com trying to work out what’s being said and what’s going on.

This is definitely a unique characteristic of Brian Hutson’s music: a surface seeming simplicity, where the more you listen intently, the more subtle complexity you discover, serving multiple layers of interest in a single, heartfelt transmission.

Pianos move to the front, acoustic guitars strum out in the background, and vocal layers fill out the center and sides as the album heads into rock ballad territory on “Dream,” where the lights go out, the lighters turn on, but you don’t see them anyway because you just want to close your eyes and soak up the symphonic layers of exultation that ecstatically consume your every cell. Once again, a complex layering of many subtleties leading to a very basic result: music that is simply beautiful.

As full as “Dream” is, “Anything Can Happen” allows for space to shimmer out again, entering with an acoustic-guitar-led sparseness opening and driving the verses as Brian Hutson meditates on the beauty of his love, until the instrumentation’s intensification combines with his shifting into the sheer joy of physical contact with his love, “And when we touch, when we kiss, and become one, an eternal bliss, all we hold true, is all that I am, I am for you.”

“Thought You Should Know” and “This Is It,” the album’s final two songs before a couple of club remixes set in, lead out Habit in classic style. A true world of experiences—ups and downs, intensity and calm, past reflections and present-to-future affirmations—the lead-out tracks take us through one last valley, a tranquility in “Thought You Should Know” and as a flame that gives a final spark before it goes out, “This Is It” asserts a final Beethoven-like triumphant ending, not Beethovien in style, but in feel. That is, a forward-looking optimism coated in a repetitive upwardly-moving chord progression, leading to a culmination of all those elements that Brian Hutson’s album consistently maneuvered to pour his heart out to the world: “Here, do you hear it beating?” He didn’t actually say that, but it’s the undertone throughout the entire album.