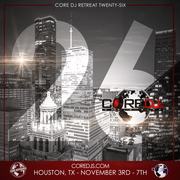 10 Years later, The Core DJ's return to HOUSTON TX. Now in its 11th year, The Core DJs Worldwide are the premier coalition for DJ’s with a membership of over 500 of the nation’s most influential DJ’s, as well as international DJ Talent.

The purpose of the core is to empower and educate the core of the music industry This DJ/Artist/Label extravaganza will be held November 3rd-7th, 2016

Where can I contact the organizer with any questions?

** NO REFUND ** for the conference will be giving UNTIL 30 Days after the event (it must be a logical reason or an emergency situation why a refund is issued back to the customer) 877 333 9940 x3 for more details on refunds.

Thanks to all the Core DJs and Tony Neal for having us and allowing us to be part of the family this weekend. It was more than we hoped for. SCMG

Oh yeah Oh YEAH! Leggo! DJ Suede in there live and lit like #SKNO what it do

Awwwwww Snap!!!! We Have Lift Off! #COREDJs