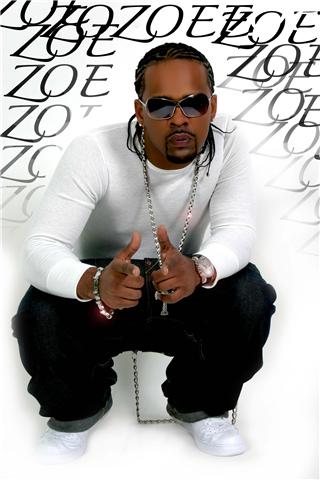 ZOE has not received any gifts yet

What is your PURPOSE for JOINING the CORE DJ RADIO NETWORK?
to network my music


PRESENTS
ZOE (one who brings life)

Everyone has a reason to hold on to the lyrics of a favorite love song…the passion, the pain, the rejoicing or the release that you feel when you hear the song that sends you completely over the top. Keeping these reasons private is something that each of us knows so much about. But sharing these reasons with the world is something that Zoe has mastered through his lyrical talents and soulful vocals. With musical influences such as Stevie Wonder, Marvin Gaye, Al Green and Michael Jackson, there is no need to wonder why this hot R&B artist out of VA (by way of the South Carolina Coast) has been able to blaze a trail into the world of R&B/Hip-Hop.

At a very young age, Zoe had dreams of inspiring others to make good love by keeping it real in their love relationships - life experiences that he knows oh so much about. While other kids were aspiring to become firefighters and soldiers, Zoe was busy mimicking the vocals of legendary R&B and Soul singers…and even a few dance moves from great groups such as New Edition and Troop. A long list of credits on his industry resume include an appearance on Showtime at the Apollo, and recent 2008 tour openings for Jasmine Sullivan other opening performances for Jagged Edge, Brandi, Keith Sweat, Montel Jordan and Carl Thomas. With his family-based group called DeJour this type of showmanship, at such a young age, would have you to believe that maintaining such a solid focus on creating music and working in the industry comes to Zoe as naturally as the air that he breathes. However, it was not until 2003 after starting his own independent label, Tre-Day Entertainment (named after his son and daughter), in Myrtle Beach, SC that the release of his 1st debut album entitled “The Situation” opened up new avenues for Zoe and gave [him] the true meaning to principle of stepping out on faith and believing in your talents.

The album did exceptionally well within the first few months of release, selling records all over the world and creating an international fan base. The success of his solo project was the catalyst for moving forward and making the necessary life changes in order to see his real dreams come into fruition. Taking faith in hand and making the move to Newport News, Virginia to team up with relative, ILL WILL/Atlantic Records recording artist Don “Quan” Ferquan. Zoe, representing Tre-Day/KINGZ NATION, released the hottest R&B Underground mix-tape out this year. This release definitely has a lil sumthin’ for everyone to vibe to… in your homes, on the streets and in your hoods. Following the mix-tape, lookout for Zoe’s debut singles “Crying Out” and “Ghetto Royalty” with crazy vocals and hot verses for the 09. You can check out the latest on this blazin’ new artist on MySpace at www.myspace.com/zoekingznation.

THE RETURN OF NEO-SOUL IN 2009..INTRODUCING ZOE

TraceyBaltimore said…
Thanks for the request ... I am always looking for HOT tracks !!! get at me
ccrmp3@gmail.com

Afro-Preachah said…
Thanks for the add bro!

Thanks for your contact. It is a pleasure having you as a friend.

Dj Starr Childd said…
What's poppin' Zoe? I'm feelin all 3 of those joints on your page!!
You need to Hit me up so I can get that in the Mix!!

EQ Philly said…
I loike the music and i think it's polished! I don't know what your situation is but i would love to send you a joint so you can do the Chorus. if not it's understandable. keep doin your thing. It's hot!
illadelstylesdvdmagazine@yahoo.com