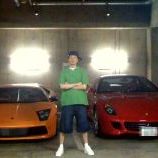 Kut has not received any gifts yet

What is your PURPOSE for JOINING the CORE DJ RADIO NETWORK?
promotion my beats

Katsuyuki Hosoda as known as Kut born and rised in neighboring prefecture of Tokyo,Japan.
Kut started out in Tokyo spinning parties around 1989. Soon he purchased his first sampler and began making tracks on his own in the early 90s.
Shortly thereafter, he quit DJing in favor of production. From 1994-1998 he spent time in various US cities. He absorbed the vibes and techniques there from many US studios.
After coming back to Japan, Kut dropped out of production for a few years. This didnt last long, as the music called him back. Unlike many Japanese artists, Kut soon aimed to focus on the international game.
Chicagos Elephant Haus/Real Estate owner, Tim Baker, discovered Kut and signed him for 3 EPs. New Yorks 4th Floor Records quickly signed him for Kut Presents Hot for Love.
At the same time, he started focusing on Europe and was immediately picked up for several EPs and put on remix duty on such labels as Bush (UK) and Oxyd (Italy),Toolroom Trax (UK), Brickhouse (Germany).,Cr2 (UK).
These cuts quickly found their way into playlist and charts and record bags of many DJs all over the world.
Also Kut have produced hip hop beats in Japan as Lucha. He already sold over 100 beats and has worked over 50 projects (not incruded mix CD) of major(Sony,Avex,Pony canyon,Universal Japan etc..) and indipendent labels untill today. He had produced to Talib Kweli, Backshot at japanese projects.
2009 now NY's DJ Marley Marl and Kut are making some blend by kut's beats on 90's classic.
Marley already playied them at his radio program.

Wanted to get @ you about a colabo. Halla when you get a chance.

yo fam we need some of those tracks

Ranjini said…
Thanks so much for the luv on the music Kut!

ZyeCha Inc. CEO/Founder PRINA said…
Oh of coarse not. Yeah he is a good rapper. No problem.

ZyeCha Inc. CEO/Founder PRINA said…
Aww don't say that. Yeah I see you on twitter and myspace I'll listen as soon as I get a chance to go back over to myspace.