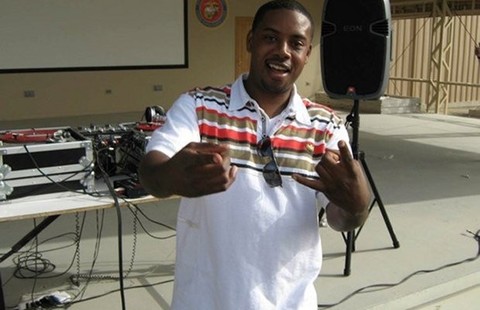 In 2009 my debut EP, Art Life, was considered one of the best Indie Hip Hop releases by many blogs, writers and tastemakers in the hip hop community. I was featured in several Top 10 EPs and Top 10 Breakout Artists lists alongside emcees such as Jay Electronica, Freddie Gibbs, Royce da 5’9 and Pill. I toured overseas that year and performed for troops in the Middle East. The military sponsored the event, all together they spent about $80,000 on my tour. And it literally was my tour, no roster, no opening acts, no other acts, just me 13 days, 2 hour sets every night, headlining The Rob Jay Tour.

The accolades were there too. Angela Yee called me personally to let me know she picked my song, “Directors Chair”, to be featured on Shade 45′s Don’t Quit Your Day Job segment. Idris Elba personally selected my song to be featured on a mixtape/soundtrack, he DJ’d, to promote the film Takers. You can still find it online, you hear him scratching over my track yelling “Straight from the land of social networking ROB JAY!” in a British accent. LRG began sending me free clothes that year to. I had a die hard friends base, at USC, that came out and supported anything I did. I had a 4 month residency at The House of Blues on Sunset where I did a series of concerts. Each show was filled up. I was having the time of my life.

4 years later I announced that I was done rapping. I left with no spoils of the game. Nothing but great memories. I would assume that financially I broke even over that period. So I guess the million dollar question is What the f*ck happened? Before I answer allow me a brief moment to say I don’t look at my career as a failure. I learned a lot, made some great friendships and had an awesome time. I have stories I can tell my grandkids one day. And I never was a one trick pony, before rap I had a buzz as a video director. I’m a programmer now and I truly believe I’m going to have an impact on hip hop through technology way bigger than anything I ever did with a mic.

Back to the story – The simplest answer is that I stopped doing what was working and I started following other people’s plans. I had something very special in the beginning but instead of valuing and building from that foundation I always focused on what someone else had and how I could get that. How can I perform at the showcase Fashawn is on? How can I get the same press Dom Kennedy is getting? Drake’s So Far Gone exploded right around this time. Seeing his success I made the first and worst major mistake in my career. I started giving my music away for free, this one decision changed everything. 6 months after making it I got a job and never again was I a full time artist. My initial fans never had a problem paying, my fans were my friends and real supporters. On top of that I just had this strong connection that I was making with people and the momentum was contagious. It wasn’t rare for people to pay $15, $20 and in some cases $40 for Art Life, an 8 song EP. It was normal for me to go out to Venice Beach for a day and make $200 selling my music. But I didn’t appreciate that, it felt like begging to me. I didn’t want to be a Guerrilla Marketer, I wanted the bright lights and the big screen. I’m the next Kanye West, or at least that’s what I thought. I had a meeting with Universal during this time. They passed on me but one thing the guy mentioned was that I should start sending my music to blogs to get more exposure. I didn’t even know what a blog was at the time. I did my research and started sending my stuff off and almost immediately people started posting it and giving me nice reviews.

This led to my next mistake, I became obsessed with blogs, press and media coverage. All I wanted was “good looks”. That time that used to be spent outside building real relationships with real people was now spent behind a computer. I terribly misjudged the impact that being known on the internet would have. It was cool being recognized but it didn’t create many fans. And even though I did get exposure I had no product for sale, everything was free. I thought once I was on Shade 45 or featured in 2 Dopeboyz my phone was going to ring the next day with someone trying to book me to come to their city. No sir, well I winded up relocating back to Houston and things were still moving along but I didn’t have the same access to production talent that I did in LA.

Honestly, in my youthful arrogance, it never occurred to me that people like this project because of the total package. I gave all the credit to me. My first EP came in an Shiny Gloss Covered Eco Wallet, with art work from a renown designer and production from Ryan&Smitty. My second project was a collection of songs I scrambled together and called a mixtape. And it was still a good project, I had some really good songs I did with Jettimasstyr and it had it’s moments but it wasn’t Art Life. With Ryan and Smitty there was no clock, we’ll record a song 5 times then decide not to put it out. We didn’t have jobs, major responsibilities or anything that that could interfere with us making music. For us a Monday was not different from a Saturday. I could show up at their studio unannounced start freestyling, then recording and now we’re cranking out songs in the moment. In Houston everything was about the hourly rate. It removed the emphasis on getting it right and replaced it with getting it done.

I befriended some artists and became a part of a music collective and although I don’t regret it, looking back it wasn’t a good move for me individually. It gets confusing when you have groups of artists operating together and there’s no clear cut leader and everyone want’s the same thing but in a different way. Plus I grew dependent, whereas in the past when it was just me, I went out and got it, now I’m a rapper going through another rapper to book a show. Now my name is co-branded with other artists, some who I didn’t know well and it was just hella confusing. They were good people though and to this day some of my best friends, I just want to emphasize that. As more time passed I got more desperate, started reaching more, thinking if I hire this person, or if I get this feature it will happen for me, I became kind of needy. And people can feel that, writers can feel that, fans can feel it. The narrative of my music and career begin to change from one of courageously chasing a dream to quiet desperation. Over time it just felt like I was trying to recreate something that left and looking for a short cut to make up for lost time. It stopped being fun, I know that feeling because it’s the same feeling I had as a video director before I moved on. I knew it was over so I let it burn.

This is a powerful post! Great insight. Hopefully artists can pick up a few gems from this one here!

Good story hopefully folks will learn from it. Some cats hell MOst cats need to be working and not rapping.