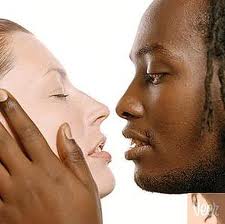 Black sexuality is a confounding matter for white people. They hesitate to even discuss in any public forum but the entire matter is not that complicated, although much research still needs to be done on how to cure white people of this malady. When white men enslaved Africans (and Jews profited) they basically dehumanized him by characterizing him as dumb, violent, oversexed, a brute and a savage. At the same time the white man created the myth that whites were the most intelligent race on the planet. Unknowingly by doing this, however, white men created an attraction in white women for black men.

This is not to say that no white women find any intelligent black men attractive. It is to say that intelligence was linked with the opposite of masculinity: the white mind vs the black penis. All of my black friends are intelligent and they are all frustrated by the fact that most beautiful white women are not sexually interested in them but instead prefer the “thug” type that is dark, muscular, unintelligent and dresses like a gangster rapper. When I tell them the historical reasoning behind this, not to mention the continued media stereotyping of blacks by Hollywood Jews, they get it loud and clear. I’ve had intelligent black guys pretend to be stupid to get fine white women and it worked almost every time. It’s probably why you see some white guys trying to act “black”. At some level they understand how it works.

Racism is a peculiar thing. The expression of it is actually how one views oneself. It is classic projection. White people say that blacks are violent because they know that they are. White people say blacks steal because they steal. White people say blacks are oversexed because they are oversexed. Let’s be brutally honest here. White people do not really like themselves very much. White males are still hung up on the huge black male penis myth that has been proven countless times to be untrue. I suppose fiction sometimes is stranger than truth but it is this symbolism created by Jews and sustained by whites that has undermined white male sexuality ever since slavery. They actually did it to themselves this time. I suppose it is easy to be insecure on a planet of 6.1 billion nonwhites and whites only number 600,000 worldwide with birthrates declining rapidly.

This is not a hard and fast rule mind you, (pun intended). There are white women that prefer intelligent black men but these women have not been completely socialized by the negative stereotypes that other whites have. The average white person buys into them hook, line and sinker and they turn on the tv every night and get another healthy dose of lies. Sometimes I run across white women that are afraid to even talk to black men. They don’t even know what to say like they need to speak Swahili or something. Know why they’re like that? Because they want to have sex with black men. That’s not machismo on my part. It’s clinical psychopathology. Why else would they be afraid? The violence is part of the sexuality myth. Violence and sexuality are almost always dominant themes in white sexuality. I don’t think BDSM is that popular in Africa.

The same is true of white males that are afraid of black men. They are latent homosexuals at some level. Franz Fanon discusses this in his classic book “Black Skin White Masks”. Huey P. Newton talked about it and Dr. Frances Cress Welsing has exhaustively researched the topic in her masterpiece “The Isis Papers”. White people are literally sick. They have a wide range of mental and possibly physical issues as well that need medical attention but they will not admit to it because they have normalized their sickness with a false reality of white supremacy.

Eventually humanity will have to face the fact that whiteness is a form of albinism. Albinism is associated with a vast array of mental and physical symptoms. White people have a form of albinism. I’m not saying they are ugly. I find many white women attractive but it is a sickness nonetheless. It has affected whites in ways they still do not understand because they are unwilling to admit that white may not be right. They live in a perpetual state of denial that is reinforced by the Jewish media. Well if I have learned anything in this lifetime, it is that pride goeth before the fall and Jews are positioned perfectly at this moment to bring about the fall of Anglo Saxons. We will not go with them.