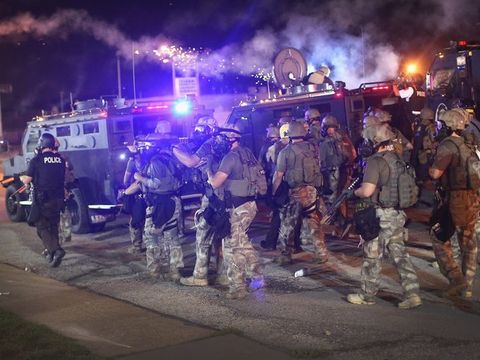 Nixon made the announcement following another night of clashes between police and protesters in the suburb of St. Louis. Sunday night and early Monday morning, protesters shot at police, threw Molotov cocktails at officers, looted local businesses, and carried out a "coordinated attempt" to block roads and overrun the police's command center. The National Guard will "help restore peace and order and to protect the citizens of Ferguson," the governor's office said.

"Tonight, a day of hope, prayers, and peaceful protests was marred by the violent criminal acts of an organized and growing number of individuals, many from outside the community and state, whose actions are putting the residents and businesses of Ferguson at risk," a statement from Nixon's office said. "These violent acts are a disservice to the family of Michael Brown and his memory, and to the people of this community who yearn for justice to be served, and to feel safe in their own homes."

The shooting death in Ferguson of unarmed 18-year-old black teenager Michael Brown has led to a week of protests that have sometimes turned violent.

Late Sunday, more than two hours before a second midnight curfew was set to begin, police fired tear gas at hundreds of angry protesters who were marching down the town's main thoroughfare toward a police command center.

Authorities said they were responding to reports of gunfire, looting, vandalism and protesters who hurled Molotov cocktails.

"Based on the conditions, I had no alternative but to elevate the level of response," said Capt. Ron Johnson of the Missouri Highway Patrol, who is command in Ferguson. At least two people injured--including one person who was shot, he said.

But protesters, including Renita Lamkin, a pastor who has been acting as a peacekeeper, said no one threw Molotov cocktails. "That is not true," she said.

The unrest also led officials to close all schools in the Ferguson-Florissant School District Monday, according to KSDK TV. The school district received information late Sunday evening that have contributed to safety concerns for students walking to school or waiting for buses on the impacted streets, the station said.

Meanwhile, a preliminary autopsy found that Brown was shot at least six times, but the circumstances of his death remain unclear.