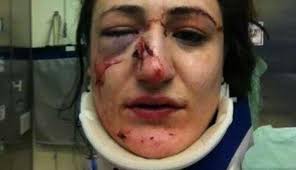 A Superior, Wisconsin police officer slammed a woman against the hood of a squad car, slapped her and punched her twice in the face with his closed fist — and an attorney for his department said the brutal attack was “defensible.

What happened between Officer George Gothner and Natasha Lancour on the night of Jan. 5 in a bar parking lot was captured by a dashboard camera. Police were apparently called to the scene because of a fight between two men, who were taken away by other officers. Then, Gothner can be seen attempting to arrest Lancour. He throws her against the hood of the squad car, slaps her and bashes her face against it. When Lancour recoils, Gothner administers two closed-fist punches to her face.

Lancour is a five-foot-tall black woman. She claimed her race was a factor in how police decided to treat her, according to Northland’s News Center. “You did that shit because I was black,” she said in the video.

Gothner claimed that he punched Lancour because she scratched him in the face.

“Suddenly Lancour reached up with her left hand and struck and scratched me across the right side of my face,” he said in a report. “My reaction was that I gave her a closed fist punch to the left side of her face.” It’s not clear in the video whether Lancour actually scratched the officer.

Still, an attorney for the Superior police department said that Gothner’s defense was sensible. Lancour’s attorney disagreed.
“She has marks on her face, swelling of the cheeks, as well as a cut between her lip and her chin,” described said the lawyer, Richard Gondik. “As you can see the officer punches her with an uppercut right, knocking her down and off camera.”

The police department has asked bystanders who may have recorded the incident to come forward so that attorneys can review any additional evidence that might exist.