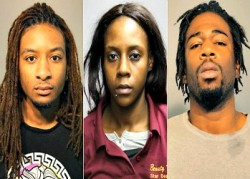 Christmas Eve wasn't the usual festive time for an aspiring West Side Chicago rapper, this after he and two accomplices were charged in the arranged killing of his mother. Qawmane Wilson hired a pair of friends to carry out a hit on his mother just so he could gain access to her bank account and life insurance policies, police say.

Wilson, 24, was the lone son of Yolanda Holmes, a successful and well-liked beauty salon owner. According to reports, Holmes provided her son, also known as rapper Young QC, with a posh life but it appeared that wasn't enough. Holmes was murdered in September 2012 in a home invasion-styled killing, with Wilson reportedly orchestrating the whole plan. Wilson was arrested Sunday (December 22) on a routine traffic stop. The accomplices, Eugene Spencer, 22, and Loraiana Johnson, 23, were arrested separately a day later.

A report from the Chicago Tribune offers more detail. From the Tribune: Wilson was arrested Sunday after a police investigation determined he had arranged to "have his mother murdered," police said. He was charged with murder and home invasion. Assistant State's Attorney Maura White said Wilson, who has his mother's name tattooed on his right shoulder according to court records, liquidated his mother's bank accounts, valued at over $90,000, a week after her death. He was also the beneficiary of two of her life insurance policies. Spencer told the authorities that Wilson hired him to carry out the hit and admitted to killing stabbing and shooting Holmes. Spencer was also selected by Holmes' boyfriend, who was in the home during the shooting, out of a police lineup.

Johnson served as the driver for Spencer as he carried out the gruesome crime. Wilson is currently being held without bail and has been charged with murder and home invasion, sharing the same charges with Johnson. Spencer has been charged with first degree murder, home invasion, and aggravated discharge of a firearm. Hit the gallery to see the mugshots of Wilson, Spencer and Johnson, along with various shots from Wilson's Instagram.