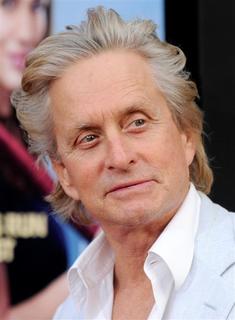 Actor Michael Douglas, who has a home in Bedford with his wife, actress Catherine Zeta-Jones, says that his throat cancer stems from a virus he caught by performing oral sex on women, a British newspaper reports.

His most recent film was "Behind the Candelabra," a biographical treatment of flamboyant pianist Liberace and his young lover, Scott Thorson, on HBO.

Douglas also had a long-running TV role in "Streets of San Francisco" and starred in "Basic Instinct," "The American President," "Fatal Attraction" and "Romancing the Stone."
He told the newspaper his cancer was caused by contracting the human papillomavirus (HPV), which he said led to cancer.

"It's a sexually transmitted disease," Douglas said of the virus.
Dr. Michael Brady, who specializes in sexual health as medical director of the Terrence Higgins Trust, told The Associated Press that oral sex could have contributed to Douglas's cancer but that it was difficult to pinpoint a single cause.

He pointed out that Douglas had been a smoker and a drinker, two factors that he said are the most common causes of oral cancer.
"There are often a number of factors, genetic, environmental, viral, that could be playing a role," he said.

Brady said there are hundreds of different types of HPV virus and that in most cases it does not cause damage. The risk is so low, he said, that he does not believe people should worry or change their sexual practices.