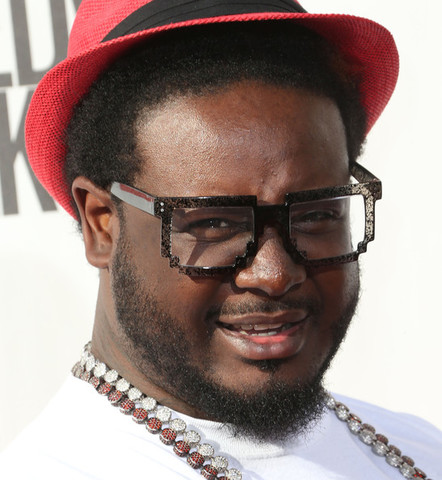 Earlier this year, T-Pain referred to Future as "the new T-Pain" on Instagram, and also stated that Future didn't know how to use Auto-Tune correctly. In response, Atlanta rapper Rocko came to the defense of Future, saying T-Pain "was out of line" for the criticism.

In an interview on VladTV, T-Pain finally addressed the subject. "Lemme tell you what happened, because I've never actually gotten to explain this to Rocko," he said. "Because I've been trying to talk to both of them. I've been talking to side people and shit. Lemme tell you what happened. When Future came out, I really enjoyed Future. I like Future. Everything about Future, I really enjoy."

T-Pain then recalled an altercation involving Future's brother. "I did, this was probably a year ago... I did like a turkey drive at Pin Ups, the strip club, in Atlanta. So I did the turkey drive, right? I was at the club, givin' out turkeys. 'Bitch, you want a turkey? Bam! Here's a turkey, bitch! Fuck you! Who wants a turkey? Who wants a turkey? I don't like you! Here's a turkey! Fuck it! Bam, bam!' ...So someone comes up to me in my VIP section, and they say, 'Yo, Future's brother is out here, and he want to come chill with you.' And I'm like, 'Oh, shit! I wanna work with Future! Yeah, let this nigga in!'"

T-Pain continued, revealing that he asked to work with Future. "So Future brother come in there... we chilled, we drank, everybody singin' songs... I'm about to leave, and I go to Future's brother, and I say, 'Yo, bro. I need to work with your brother. We got to work together. This shit has got to happen.' This nigga turns to me and says, 'Nigga, my brother would never work with you. Fuck you and everything you stand for.' I turned around...because my wife was there with me, so I didn't want to get into no squabble... my wife was there. That would've just put her in a weird situation."

"I respect the music game... but when this nigga said, 'My brother would never work with you. Fuck you and everything you stand for,' ...I'm like, 'Damn, bruh. Really?'" said T-Pain.

As a result of the confrontation, T-Pain later posted a tweet about Future, including one that read, 'Funny thing about that Bugatti you woke up in, #ItsMine #OhTheIrony."