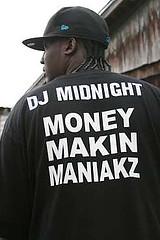 Dj MIdnight has not received any gifts yet

Give Dj MIdnight a Gift

What is your PURPOSE for JOINING the CORE DJ RADIO NETWORK?
I'm a local Dj From houston interested in joining to network and spread the emphasis of the DJ on Modern music

About DJ MIDNIGHT Call me (641)715-3900 EXT. 57407!!!!!!
DJ MIDNIGHT, born Mark Anthony, from Houston Texas, is simply the hottest up and coming DJ in the south. MIDNIGHT has made a vow to bring back the essential status of hip-hop. In early 2004 he began his venture into the DJ scene hosting parties at local spots in the texas area, before establishing himself as a well known college scene DJ. Midnight used his leverage from the from the college atmoshpere to network with artist an dj's such as Slimthug, Kiotti, DJ Drama, and Bun B just to name a few.He also took time to establish a power squad "Get Money Boyz" which has taken over the city of Houston and looks to be the new "Boys in Blue" or ABN. DJ MIDNIGHT knows the vital role the DJ plays in hip hop and plans to keep that role Strong!

Rapper/mogul Jay-Z, Hip-Hop soul queen Mary J. Blige and music icon Stevie Wonder will be among the stars on hand to celebrate the inauguration of President-elect Barack Obama at the first-ever Neighborhood Inaugural Ball.

Obama will host The Neighborhood Ball: An Inauguration Celebration, which will take place at the Washington Convention Center in Washington D.C. and air live from 8 to 10 p.m. ET Tuesday (Jan. 20) on ABC.

In addition to Jay-Z,… Continue