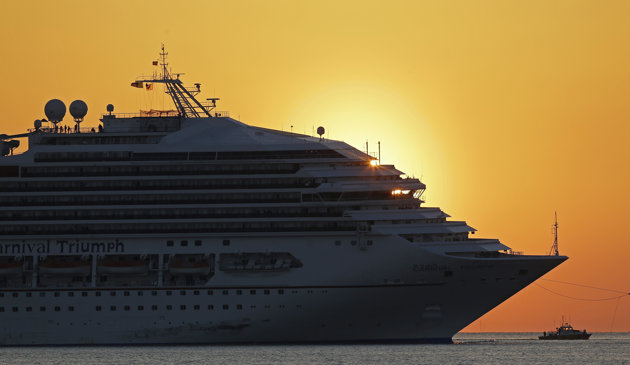 MOBILE, Ala. -- A cruise ship disabled for five nightmarish days in the Gulf limped under tow into port with more than 4,000 people aboard late Thursday, passengers raucously cheering the end to an ocean odyssey they say was marked by overflowing toilets, food shortages and foul odors.

"Sweet Home Alabama!" read one of the homemade signs passengers affixed alongside the 14-story ship as many raucously cheered at deck rails lining several levels of the stricken ship Triumph. The ship's horn loudly blasted several times on its final docking approach as some gave a thumbs-up sign and flashes from cameras and cellphones lit the night.

"Hello, Mobile!" someone aboard shouted amid the cheering. Some danced in celebration on one of the balconies. "Happy V-Day" read one of the homemade signs made for the Valentine's Day arrival and another, more starkly: "The ship's afloat, so is the sewage."

A few dozen relatives on the top floor of the parking deck of the terminal were waving lights at the ship as it was carefully making its way alongside. Those about were screaming, whistling and taking pictures.

Hundreds gawked from dockside at the arrival at the Alabama cruise terminal in Mobile, the state's only seaport, as the Triumph inched into port about 9:15 p.m. Central time. It took six grueling hours navigating the 30-odd-mile ship channel to dock, guided by at least four towboats. Nearly 900 feet in length, it was the largest cruise ship ever to dock at Mobile.

Play VideoCruise Ship Limps to Port
And even once it is stable, it will take four to five hours for all the 3,000 passengers to be off, said Carnival senior vice president of marketing Terry Thornton.

Passengers on board in texts and flitting cellphone calls described miserable conditions while at sea, many anxious to walk on solid ground. But for now, they waved towels at the throng at dockside and even motorists who stopped on the shoulder of major Interstate 10 near the port to watch the ship come in.

Carnival have the option of a seven-hour bus ride to the Texas cities of Galveston or Houston or a two-hour trip to New Orleans. Some also can stay in Mobile.

"I can't imagine being on that ship this morning and then getting on a bus," said Kirk Hill, whose 30-year-old daughter, Kalin Christine Hill, is on the cruise. "If I hit land in Mobile, you'd have a hard time getting me on a bus."

Buses are standing by to take them to their next stop and Galveston is the home port of the ill-fated ship, which lost power in an engine-room fire Sunday some 150 miles of Mexico's Yucatan peninsula.

It was the end of a cruise that wasn't at all what it should look like in a brochure.

Thornton said the ship had been fully cleared by customs and Border Patrol, and that should speed up the process.

"I appreciate the patience of our guests and their ability to cope with the situation. And I'd like to reiterate the apology I made earlier. I know the conditions on board were every poor," he said. "We pride ourselves on providing our guests with a great vacation experience, and clearly we failed in this particular case."

On Thursday night, dozens of chartered buses - with markings from Alabama, Louisiana, Mississippi and Texas - had gathered in Mobile. Carnival said 100 buses had been reserved and that it will cover transportation costs.

While the passengers are headed home, Triumph will be headed to a Mobile shipyard for assessment, Thornton said.

“I appreciate the patience of our guests and their ability to cope with the situation. And I'd like to reiterate the apology I made earlier. I know the conditions on board were every poor.”
Gerry Cahill, Carnival CEO
Earlier Thursday - four days after the 893-foot ship was crippled by an engine-room fire in the middle of the Gulf of Mexico - the more than 4,200 passengers and crew members suffered another setback with towline issues that brought the vessel to a dead stop for about an hour just when it was getting close to port.

As the vessel drew within cellphone range Thursday, passengers vented their anger.

Renee Shanar, of Houston, was on board with her husband, who she said has heart trouble. They were told they will be among the first to disembark, she said.

"I don't believe them; they've been lying to us from the beginning," Shanar said.

Disgusted by the foul air and heat on the lower decks, many passengers hauled mattresses and bed sheets onto the top deck and slept there, even staying put in a soaking rain. As the ship approached the coast, a slew of Carnival workers removed the bedding and took it downstairs.

"Today they cleaned the ship, they're serving better food, covering up basically, but at least they're making it more bearable," said Kalin Hill, of Houston, who boarded the Triumph as part of a bachelorette party.

In a text message, though, she described deplorable conditions over the past few days.

"The lower floors had it the worst, the floors `squish' when you walk and lots of the lower rooms have flooding from above floors," Hill wrote. "Half the bachelorette party was on two; the smell down there literally chokes you and hurts your eyes."

She said "there's poop and urine all along the floor. The floor is flooded with sewer water ... and we had to poop in bags."

The company disputed the accounts of passengers who described the ship as filthy, saying employees were doing everything to ensure people were comfortable.

“The lower floors had it the worst, the floors `squish' when you walk and lots of the lower rooms have flooding from above floors... The smell down there literally chokes you and hurts your eyes.”
Kalin Hill, Passenger
Some travel agents said cruise prices and bookings have not been affected by the disabled Carnival ship, but others in the industry say it's too early to tell.

Thelbert Lanier was waiting at the Mobile port for his wife, who texted him early Thursday.

"Room smells like an outhouse. Cold water only, toilets haven't work in 3 1/2 days. Happy Valentines Day!!! I love u & wish I was there," she said in the text message, which was viewed by The Associated Press. "It's 4:00 am. Can't sleep...it's cold & I'm starting to get sick."

No one was injured in the fire aboard, but a passenger with a pre-existing medical condition was taken off the ship as a precaution. In addition, the Coast Guard said in a statement Thursday that it evacuated a passenger who reportedly suffered a stroke.

Carnival said the original plan was to tow the ship to Progreso, Mexico, because it was the closest port, but by the time tugboats arrived, the ship had drifted about 90 miles north due to strong currents, putting it nearly equidistant to Mobile. It was also logistically easier for the company, which said costs were not a factor.

Carnival Cruise Lines has canceled a dozen more planned voyages aboard the Triumph and acknowledged the crippled ship had been plagued by other mechanical problems in the weeks before the engine-room blaze. The National Transportation Safety Board has opened an investigation.

Gulliksen said the Triumph's recent mechanical woes involved an electrical problem with the ship's alternator on the previous voyage. Repairs were completed Feb. 2, and the problem was not related to the fire, he said.

Passengers were supposed to get a full refund and discounts on future cruises, and Carnival announced Wednesday they would each get an additional $500 in compensation.