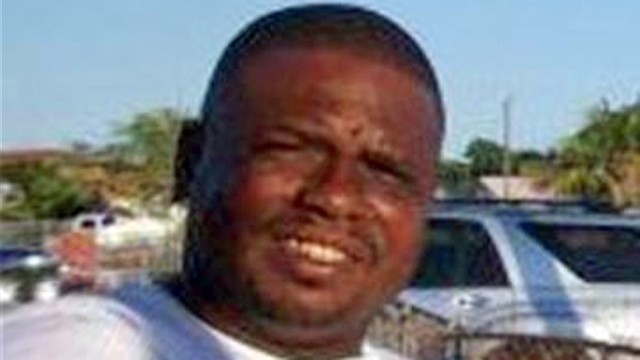 Most of the skin on his face is gone, and nearly 50 percent of his body is covered in third-degree burns, but doctors say Darrell Brackett, who was set on fire in front of a Brownsville gas station on Christmas night, will survive.

“We are trying to think positive, but the next three days will be critical,’’ said his mother, Bridgett Brackett, who on Thursday distributed fliers at the gas station where her son was attacked. She and her family are asking the public’s help in finding those responsible for the crime, which happened at the U-Gas station, 4700 NW 27th Ave., along one of the busiest, and most blighted, thoroughfares in the village.

Her son was confronted about 11:30 p.m. Tuesday by someone who grabbed a gas can he was carrying, doused the liquid on him, then set him on fire. Brackett ran screaming into the street, where a passerby helped him to a grassy area, and he dropped to the ground and rolled until the fire was extinguished.

Miami-Dade police are investigating the incident as an attempted homicide, but had few clues so far.

Police “are out there canvassing the neighborhood — going door to door trying to see if anybody saw anything,” Brackett said.

Employees at the U-Gas said that the security cameras outside the store were not operating at the time of the incident.

On Christmas night, Brackett, 44, and his girlfriend had a cookout at their home, at 2960 NW 68th St. Then, they took their guests home and after dropping them off, the couple ran out of gas near Northwest 49th Street and 23rd Avenue. Brackett walked to the gas station, where he paid for gas and walked over to the pump.

Brackett’s mother said her son told the passerby — a woman she thanks for saving her son’s life — “They didn’t have to do this to me.” He mentioned that he had had some words with some men before he was attacked. It is not known whether he was targeted by someone he knew, or whether the crime was random.

Bridgett Brackett, who lives in a tidy yellow house in neighboring Liberty City, said her son, who has a lengthy arrest record for drugs, has had his ups and downs. But she said he had recently settled down and was not the kind of man who went looking for trouble.

He was working for his girlfriend’s uncle’s lawn service as a gardener and driver, his mother said. He grew up in Liberty City and graduated from Miami Northwestern High School.

Just a year ago, Brackett lost his older brother, Jerome Gardner, who fell from a parking garage in a construction accident.

Brackett said she was praying and hoping for the best for her son.

Dr. Carl Schulman, trauma surgeon at the Jackson Memorial Hospital’s Ryder Trauma Center, said about one in four patients of Brackett’s age and burn severity do not survive, usually dying from infection.

“He has some burns over some critical joints particularly elbows, hands.....This is going to be a lifelong process,” Schulman said.

Doctors already did some bedside surgery, making incisions through the burned skin to relieve the pressure from accumulated fluid. Next, doctors will replace skin temporarily with skin from a cadaver or pig. Permanent skin graphs will involve taking skin from areas that aren’t burned.

Pastor Charles Dinkins, with Hosanna Community Baptist Church, which is just a few blocks from where Brackett was set on fire, said it may be difficult for police to solve the case. Many in the crime-plagued-neighborhood have developed a no-snitch survival mentality, he said.

“We used to have citizens who stood up to say we will not tolerate this, but we’ve developed a sense of helplessness that often comes from neglect,’’ Dinkins said.

Dinkins said that some gang initiations involve ordering potential members to kill someone at random, a trend that he’s seen too frequently in places like Brownsville, where more than 90 percent of the children in the community live below the poverty line.

“It’s just tragic in terms of how this occurred, and even more tragic is we in the community have become so accustomed to seeing shootings and death, that to some extent, we view it as being normal,’’ Dinkins said.

Detectives ask anyone with information on Brackett’s attack to call Miami-Dade County Crime Stoppers at 305-471-8477.

Somebody tried to kill him :(